You are here: Home / Milica Pejanović-Đurišić 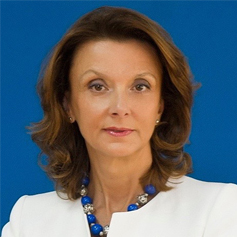 Prof. Dr. Milica Pejanović-Djurišić served as Minister of Defence in the Government of Montenegro from March 2012 to November 2016. During her term in office, Montenegro’s membership in NATO was in focus, with implementation of comprehensive reforms in defence and security sectors. Montenegro received the invitation to join NATO on the 2nd December 2015 what was followed with the full-fledged membership in 2017. Prof. Pejanović-Djurišić is a member of Mediterranean Women Mediators Network. Previously, she was the first ambassador of independent Montenegro to France, Monaco and UNESCO. From 2004 to 2006, Mrs. Pejanović-Djurišić was Ambassador of the State Union Serbia&Montenegro to Belgium and Luxembourg. In the period 1992-2001 she was member of the Parliament of Montenegro and was elected member of the State Presidency (1990-1992) at the first democratic elections in Montenegro.
With the PhD in Telecommunication Engineering, Milica Pejanović-Djurišić continuously pursued her academic career, being full professor in Telecommunications and Wireless Communications at the Faculty of Electrical Engineering, University of Montenegro and Director of its Research Centre for ICT. She has achieved significant research and innovation results that have been published in a number of books, more than two hundred scientific papers, project reports, tutorials, keynote speeches, invited lectures … Prof. Pejanović-Djurišić also has considerable industry experience being President of the Board of „Telekom Montenegro“ (1999-2002), as well as President of the Board of the first Internet provider in Montenegro (2001-2002). She has been working as a consultant in the field of ICT, with expert engagements for a number of companies, European Commission, ITU and participating in a number of global professional associations and initiatives in the field of info-communication technologies.